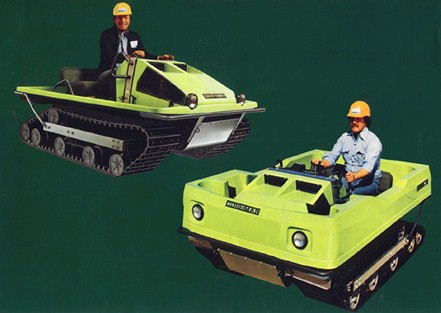 Here are some Photos of the Trackster I rebuilt.

Picking up a Marsh Model Trackster this weekend.

Picked up the Trackster 11-11-01. The best thing on it, are the Tracks. Part of the Frame is broke, which held the top Bogie Wheels. ( See Photo ) The Engine is Frozen, ( Hasn't been run in eight years ), the Body is melted on the left side. They had it stored near a wood stove, so I was told. Looks to me like someone took a torch to it.  We haggled over the asking price and came to a figure that we were both happy with...   Started to take a close look at the Motor, so far it looks like its just corroded in the cylinders. I'm going to fill the cylinders with oil and let it sit for a week or two and see what happens.

Looks like the engine in the Trackster is toast!  I got it freed and checked the compression. One side was 120 psi., the other was 35 psi.  So... I pulled the motor, the cylinder and piston. ( see photo of piston below ). If I can get all the parts I need to rebuild it, and it's not to much money, I'll do so, but maybe I should bite the bullet and get a Honda 24hp and do the conversion.

Here are a few shots of the engine compartment. What a Mess!!!

Well... I did want to have the Trackster running for this Winter, but I'm just going to redo the whole vehicle! It just needs to much done to it!  I'm hoping the Tranny is ok, because if I have to remove it, you have to take the Flotation Collar off first and that thing is on tight!!!!  I removed all the screws that hold it on but it wont move!

Removed the Seat and Battery Tray.  Degreased the inside and Transmission.

Got the Floatation Collar off.  I found two more things that need replaced. The Axle supports. Both are rusted, but the right side is real bad. See Photos.

Cleaned up the body. Got all of the large sections of Glue off.  Need to take some Acetone and clean off the remaining Glue.

Removed the Transmission and Tracks.

I found that some of the Bogie Wheel Bearings are shot, as you can see in the photo above.

Removed the remaining components from the body.

Started to disassemble the undercarriage.

Picked up a Marsh Model Body and some parts From Pete Cagle.

Started to clean and prep some body parts.

Just got the Engine Hood back from being Coated with Ultimate Linings Spray-On Polyurethane Lining.  Here are some shots.  It added a little weight, maybe five pounds.

Hi all!  Picked up three Tracksters.  Went last weekend to pick up the first load…. An uneventful trip! Went again 6-6-03 to pick up the rest. It’s a four-hour drive from home to Warren Pa.  I got thirty miles from Warren, and the Van died on me!  I was in the middle of the woods (Allegheny Forest).  Phone reception was… SERVICE… NO SERVICE… SERVICE… NO SERVICE!!!! I was finely able to get a hold of the guy I was to meet in Warren.  He checked the phone book for some numbers of Chevy dealers, and a Firestone Tire Service Center.  The dealer didn’t have a wrecker, so… They said call Firestone.  It took  four hours for them to get to me.  During that time numerous people stopped to see if I needed help.  The wrecker finely got there.   When we got back to the shop.  The Mechanic thought it was the fuel pump, but I had just replace it, and the fuel filter.  Turns out it was the rotor and distributor cap.   Easy fix.   I was hoping to get home at 2:30, when my day started. Ended up being 7:30!   Here are a few pics road side, and vehicles I bought.

David Wykoff sent in these photos of his Trackster.

Here are a few shots of one of the three Tracksters I bought.  It was missing the Governor, air cleaner, air cleaner housing and the fuel tank needed cleaned and all the lines replaced. It runs great now.

Got are first Snow Fall.  Took the Trackster out for a ride.

Stated to refinish the body... Just a color change. Sand blast some of the metal parts, prime and paint.

Finished the Hood and back cover.

Finished the top portion of the Trackster paint job.  Here's a few shots.

Put new lights on and removed the skid plate for further repairs.

Still a few things I need to do yet.

Was installing lights on the Trackster and going through the wiring when I discovered that the wire coming from the point to the CD box was deteriorating, insulation coming off etc. So I pulled the flywheel and replaced it, needless to say while reassembling I broke the cam! Real tricky to put them back on. Luckily I have some old OMC motors and just took one off, glass beaded it and I was good to go! Got it all back together and running great! Ready for Philipsburg on the 25th of September.

Just another shot of the Trackster. The only thing I want to do yet, is recover the seat cushions. and replace the skid plate.

Here's a Video of my Trackster